Nobel Prize: How English beat German as language of science–

Two Norwegian scientists have won the Nobel Prize for physiology or medicine – for work published in the English language. Historian of science Michael Gordin explains why they wrote in the language of Dickens and Twain rather than Ibsen and Hamsun.

Permafrost, oxygen, hydrogen – it all looks like science to me.

But these terms actually have origins in Russian, Greek and French.

Today, though, if a scientist is going to coin a new term, it’s most likely in English. And if they are going to publish a new discovery, it is most definitely in English.

Look no further than the Nobel Prize awarded for physiology and medicine to Norwegian couple May-Britt and Edvard Moser. Their research was written and published in English.

This was not always so.

“If you look around the world in 1900, and someone told you, ‘Guess what the universal language of science will be in the year 2000’, you would first of all laugh at them. It was obvious that no one language would be the language of science, but a mixture of French, German and English would be the right answer,” says Princeton University’s Rosengarten professor of modern and contemporary history Michael Gordin.

Gordin’s upcoming book, Scientific Babel, explores the history of language and science. He says that English was far from the dominant scientific language in 1900. The dominant language was German.

“So the story of the 20th Century is not so much the rise of English as the serial collapse of German as the up-and-coming language of scientific communication,” Gordin says.

You may think of Latin as the dominant language of science. And for many, many years it was the universal means of communication in Western Europe – from the late medieval period to the mid-17th Century. Then it began to fracture. Latin became one of many languages in which science was done.

The first person to publish extensively in his native language, according to Gordin, was Galileo. Galileo wrote in Italian and was then translated to Latin so that more scientists might read his work. 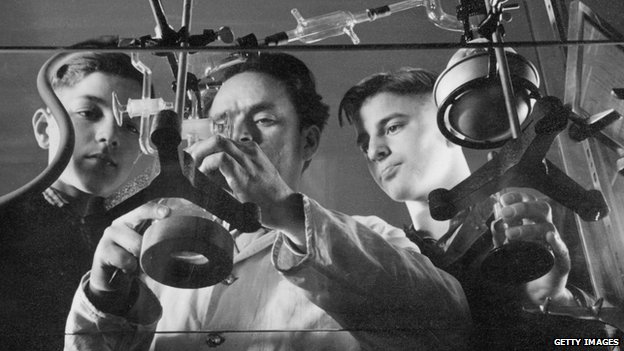 Fast forward to the 20th Century. How did English come to dominate German in the realm of science在科学领域?

“The first major shock to the system of basically having a third of science published in English, a third in French and a third in German – although it fluctuated based on field, and Latin still held out in some places – was World War One, which had two major impacts,” Gordin says.

After World War One, Belgian, French and British scientists organised a boycott of scientists from Germany and Austria. They were blocked from conferences and weren’t able to publish in Western European journals.

“Increasingly, you have two scientific communities, one German, which functions in the defeated [Central Powers] of Germany and Austria, and another that functions in Western Europe, which is mostly English and French,” Gordin explains.

It’s that moment in history, he adds, when international organisations to govern science, such as the International Union of Pure and Applied Chemistry, were established. And those newly established organisations begin to function in English and French. German, which was the dominant language of chemistry, was written out注意非限制行定语从句怎么写.

The second effect of World War One took place in the US. Starting in 1917 when the US entered the war, there was a wave of anti-German hysteria that swept the country.横扫全国

“At this moment something that’s often hard to keep in mind is that large portions of大部分 the US still speak German,” Gordin says.

In Ohio, Wisconsin and Minnesota there were many, many German speakers. World War One changed all that.

The Supreme Court overturned those anti-German laws in 1923, but for years they were the law of the land. What that effectively did, according to Gordin, was decimate foreign language learning in the US. 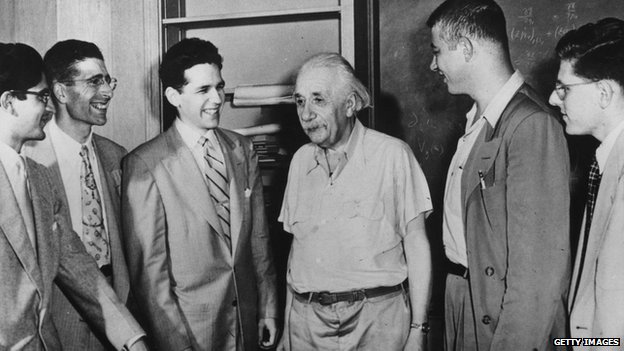 German-born physicist Albert Einstein taught and researched in the US

“In 1915 Americans were teaching foreign languages and learning foreign languages about the same level as Europeans were,” Gordin says. “After these laws go into effect, foreign language education drops massively. Isolationism kicks in in the 1920s, even after the laws are overturned, and that means people don’t think they need to pay attention to what happens in French or in German.”

This results in a generation of future scientists who come of age with limited exposure to foreign languages.

That was also the moment, according to Gordin, when the American scientific establishment started to take over dominance in the world.

“And you have a set of people who don’t speak foreign languages,” said Gordin, “They’re comfortable in English, they read English, they can get by in English because the most exciting stuff in their mind is happening in English. So you end up with a very American-centric, and therefore very English-centric, community of science after World War Two.”

You can see evidence of this world history embedded into scientific terms themselves, Gordin says. 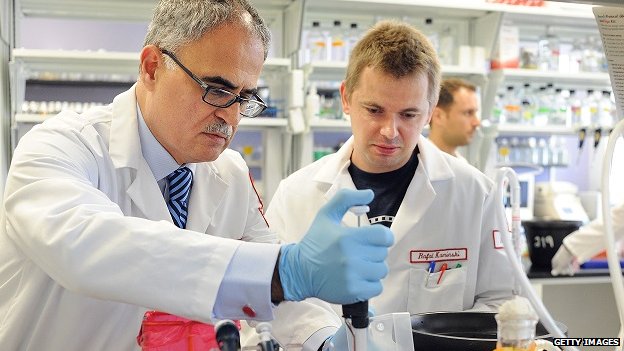 Today research is published, and discoveries are named, almost entirely in English

Take for example the word “oxygen”.

The term was born in the 1770s, as French chemists are developing a new theory of burning. In their scientific experiments, they needed a new term for a new notion of an element they were constructing.

“They pick the term ‘oxygen’ from Greek for ‘acid’ and ‘maker’ because they have a theory that oxygen is the substance that makes up acids. They’re wrong about that, but the word acid-maker is what they create, and they create it from Greek. That tells you that French scientists and European scientists of that period would have a good classical education,” Gordin says.

The English adopted the word “oxygen” wholesale from the French. But the Germans didn’t. Instead they made up their own version of the word by translating each part of the word into “Sauerstoff”, or acid substance.

“So you can see how at a certain moments, certain words get formed, and the tendency was for Germans, in particular, to take French and English terms and translate them. Now that’s not true. Now terms like online, transistor, microchip, that stuff is just brought over in English as a whole. So you see different fashions about how people feel about the productive capacity of their own language versus borrowing a term wholesale from another,” Gordin says.